ADDRESS AT THE WORLD PEACE SUMMIT 2000 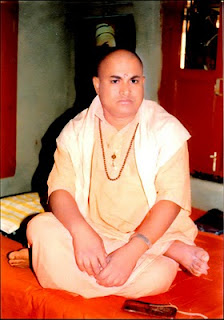 My humble regards to all esteemed Acharyas, Spiritual Leaders, Scholars and Saints of various religions of this World, present here in this august assembly, being held with the purpose of establishing universal peace and harmony. My appreciation to all my brothers and sisters who have come here from all over the world with the hope of being blessed by these divine personalities.
I also take this opportunity to thank the organizers for the warm and cordial welcome they have given us in America, foremost in science, technology and prosperity.
My salutations to Almighty, the all merciful God, who inspired us to assemble here, to search a common way out to resolve the burning problems of humanity.
Today when the entire humanity is feeling threatened by the possibility of nuclear war in near future, this summit has a great importance. I am confident that this summit will prove to be a boon in restoring peace and harmony all around us and also eliminate the hatred, bitterness and differences prevailing in our minds.
On this occasion, let us give homage to our holy forefathers and Gurus, Shankar, Ramanuj, Christ, Buddha, Mohammed, Mahavir, Jarathustha and others, who preached the same ideals of universal friendship, truth, non-violence and tolerance. But we, the poor followers, have forgotten the theme of their teachings and have driven the world to the verge of devastation, calamity, insecurity and cares. Thus we are repeatedly insulting them.
There is animosity, clash, riots, atrocities and disputes due to the vested interests of some unworthy persons for political, geographic, economic or other selfish motives but religion is blamed for all this. I assert that no religion and religious leader have taught us to be incompassionate, brutal and violent towards anybody. Religion means cultivating humane and moral sense, manifestation of our inherent divine faculties and cessation of all ill-feelings. On the other hand the irreligion infuses tyranny, animosity, hatred, selfishness, quarrels etc.
In the above context, I am narrating a story to you. A Guru had two disciples. They used to quarrel all the time due to their evil natures. The Master in order to settle their disputes told one fellow to serve his one leg and other fellow, the other leg. In India, the service of guru is an important part of religion. One day one of the disciples had gone some work. The other one served Master's one leg but didn't touch the other leg. In course of sleeping the Guru turned aside and naturally his one leg came upon the other. The foolish disciple looked at it and hurt the upper leg heavily with a stick. The Guru went on writhing with pain, the whole night.
On the second day the other disciple arrived and found one of his legs swollen. He enquired about it and picked up a stick and broke the Guru's other leg which his friend used to serve. The Master cried out of agony on getting his both legs injured by those foolish disciples.
We, the so-called disciples, are doing the same foolishness of agonising our Gurus.
My reverend Gurudeo Paramhamsa Swami Param used to say that just as a housewife serves everybody in the family keeping her loyalty and dedication intact to her husband, anyone can follow his religion without nurturing hatred for others. I feel proud and privileged to sit in the lotus feet of His Holiness who had the deepest regards for all religions. I have seen him bowing down before the picture of the holy Mecca with utmost regard. I have seen him visiting Churches, Mosques, Buddhist viharas, Jain pilgrim places and the Gurudwaras with equal devotion.
My Master taught us that God is never bound to a particular sect or religion but all religions provide the same path of truth, honesty, divinity and Godhood. We, the Sanyasins daily pray to Lord Shiva with this well-known verse –
O Lord! As different rivers emerging from different sources, having their paths crooked or straight, ultimately merge into the sea, similarly people of different tendencies worshiping different deities ultimately lead to Thee.
The same idea of unity in diversity has been depicted in the sayings of Vedas, Bible, Holy Kuran, Dhammapada and all other scriptures.
Different religions are like different flowers which collectively beautify a big garden. The humble gardener who brought them up with his long time service and sincerity gets immense joy and satisfaction. Each flower has its own fragrance and beauty. No one is unworthy there. The gardener becomes grieved at the loss of anyone of them.
It is also true that roses will not become jasmines or lotuses. Similarly every religion should keep its identity preserved and untransformed. None of them is less pious than any other because all religions have been enunciated by extraordinary great men who were full of compassion and kindness for the entire humanity. They were above all the mean mindedness and teachings.
I hope, we will realize our shortcomings and misunderstandings and forgive all the ill-feelings of others with a commitment to universal friendship and harmony.
I express my deepest regard for all spiritual leaders on behalf of Hinduism, the mother religion of the world and its most ancient order of saints and sages who taught the same ideals of tolerance, non-violence, renunciation, generosity and self-restraint.
I wish all success to this religious summit.

VISITOR LOCATION AROUND WORLD "LIVE" AND YOUR LOCATION

Please Give me Feedback for this Blog